Ready for something we are absolutely stoked about? You can apply and get a passport again — hooray! As of July 6, four processing agencies moved into Phase 2 which means more staff are allowed to process applications (Since March, passport operations have been severely reduced). There are only 3 Phases, so it’s a big move to upgrade to Phase 2.

Right now, those who need a passport in the next 72 hours (or for an emergency) are still getting first priority, but more staff mean more people to sort through other applications that have already been received + new apps.

There are still some delays, but according to the US Department of State, “applications will be processed on a first in, first out basis, beginning with the oldest applications received.” And they have a lot to process. Last week, (June 25 to July 1), agencies received 133,000 passport applications, and had 1.51 million passports waiting to be issued. They report that these numbers are pretty typical compared to last year, but having limited processing means things are going to be delayed.   Even though things may take a minute, it’s a really good sign for travel to see passport agencies opening back up.

How Long Until I Get My Passport? Can I Check My Status?

The State Department isn’t publishing the projected wait time, just that you should expect delays. However, you can check the status of your passport online (or call  1-877-487-2778) if you have already submitted an application. So you know, "Not Found" means your application is in transit to one of the passport agencies and "In Process" means your application is with the Department of State and will be reviewed as staff return to work in phases.

How Do I Apply For A Passport?

This change in passport processing is really good news for more than a few reasons — as more and more passport agencies are opening up (which is determined by the State Department), we are thinking that maybe it’s a sign that the International Do Not Travel Alert is about to change, too. It’s been in place since March and hasn’t budged despite decreasing virus cases and borders opening in dozens of countries.  More and more agencies opening up mean more and more passports are being issued. There will likely be an influx of applications once the travel alert has been reduced, so we can only wonder ... is moving into Phase two a sign that they're preparing for that?

Recent statements from the US Secretary of State also sound like maybe a change is on the horizon. In a recent press conference, Mike Pompeo mentioned “I'm very hopeful that I’ll be able to travel to Europe here in just a handful of weeks” to have some in-person discussions with European leaders about the state of a few political concerns.

Pompeo also addressed the restrictions Europe currently has on restricting travelers from US from traveling to certain countries, stating that “we’re working European counterparts to get that right”, focusing on the fact that we “want to make sure it’s science-based, health-based, that our transportation team, Homeland Security team, as well as the State Department, deliver a process and set of tools so that not only are nations comfortable opening their borders up again, but individuals who are making the choice to travel are comfortable”.

The State Department has published a lot of helpful resources on applying for your passport so be sure to check up on the FAQ to get questions answered and get more info on the phased reopening here. 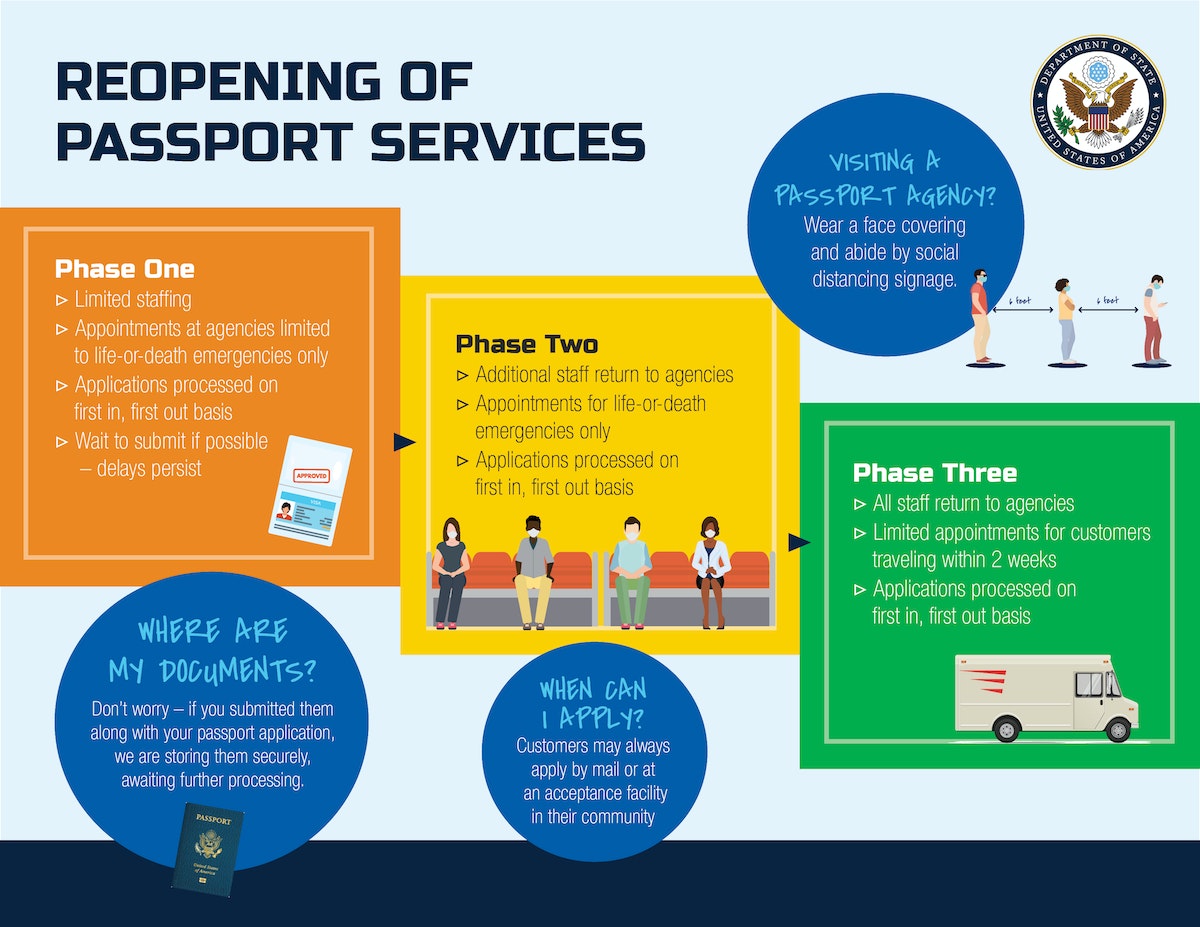 Image via the US State Department's Passport Processing Site